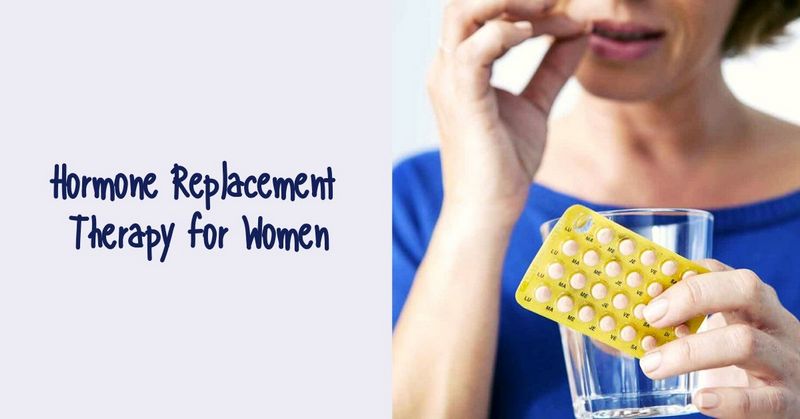 Age-related changes in the body are inevitable. Fatigue gradually accumulates, working capacity decreases, the body ceases to be flexible and obedient, wrinkles appear on the face. If aging causes serious discomfort, it is difficult to come to terms with it. This primarily relates to menopause in women.

What is hormone replacement therapy (HRT)?

According to statistics, menopause proceeds without complications only in 20-30% of women. The rest notice symptoms of menopausal syndrome of varying severity: hot flashes, increased sweating, sleep and memory disturbances, anxiety, tearfulness, and increased fatigue. Later, they may also experience burning sensation in the bladder, urinary incontinence, dry skin and brittle nails, obesity, osteoporosis, arthritis and even Alzheimer’s disease can occur. Hormone replacement therapy (HRT) was developed to combat these pathological conditions.

The principle of its action is based on the replenishment of hormones in the female body. During menopause, endocrine glands significantly reduce the independent production of estrogen and progesterone. Their deficiency also causes various symptoms of menopausal syndrome. With the introduction of hormonal drugs from the outside, the woman’s body continues to function in almost normal mode. Of course, one cannot turn back time and the climax will come anyway but a woman can avoid the majority of unpleasant sensations and consequences.

There are a lot of ridiculous myths about hormones. Many women think that they cause weight gain and sometimes even the growth of a woman’s mustache and beard, while everything happens quite the opposite. In fact, HRT is an almost indispensable tool for the prevention and treatment of the menopausal syndrome. Hormonal drugs can affect the immediate cause of menopause – a deficiency of sex hormones. All other methods, such as maintaining a healthy lifestyle, non-hormonal drug treatment of menopause symptoms, a special diet, will not eliminate the problem. Although it is worth noting that proper nutrition, exercise, refusal from bad habits can enhance the effect of HRT many times.

HRT for women: pros and cons

Hormone replacement therapy has both supporters and opponents. The pros and cons of HRT are regularly discussed by gynecologists, scientists and specialists involved in women’s health. Despite the popularization of a healthy lifestyle and a large number of different preventive programs, only HRT remains clinically proven medical method to combat the unpleasant manifestations of menopause.

However, opponents of HRT put forward their arguments:

Studies conducted in recent years have proved that theoretical risks in HRT can be minimized and the treatment benefits maximized. To do this, you need to choose the optimal treatment regimen and start it at the most appropriate time. Since the safety of hormone therapy in menopause is largely dependent on age, healthy women under 60 should not worry about the risks. According to the results of new studies and data from previous years, in most cases, the advantages of HRT significantly outweigh the disadvantages.

Nevertheless, there are a lot of contraindications for HRT, so a woman should undergo a full examination before starting treatment. You can not use hormone therapy (or should use it with caution) if you have any of the following diseases and pathologies:

A contraindication for HRT is also a hereditary predisposition for endometrium cancer, breast cancer and increased sensitivity to the components of the drug.

Side effects of HRT

Some women refuse to take hormonal drugs since they are afraid of side effects. However, studies show that there are not so many adverse reactions and most of them are not able to have any serious harmful effects on women’s health. So, what side effects can be caused by HRT?

You should remember that the risk of side effects of HRT is negligible. Otherwise, hormone replacement therapy would not be approved by the international medical community.

How long can a woman take HRT drugs?

When planning hormone therapy, a woman should understand that HRT is not short-term! Only when taken for a long period, hormonal drugs will help a woman cope with hormonal changes and to improve the quality of life. Of course, the effect on the early menopausal symptoms will be provided almost in the first week of taking hormonal drugs, but to consolidate the positive effect and treat the late symptoms, it should last a rather long time – from a year to several years.

Specialists developed two schemes for the implementation of HRT:

Today, there are virtually no restrictions on the duration of HRT. Of course, this applies only to those patients who are monitored by a gynecologist. The upper age limit of HRT is 65–70 years, provided that the therapy was started on time and not interrupted.

There are several basic principles for taking hormone replacement therapy drugs developed by the International Menopause Society. Prescribing HRT should be part of a treatment strategy that also includes lifestyle recommendations: nutrition, physical activity, smoking cessation, and alcohol abuse. HRT should be prescribed strictly individually, taking into account the existing symptoms and the need for prevention. A doctor should also take into account the anamnesis of women, both her own and her family.

Women who have menopause at an early age, before 45 or even 40 years old, have an increased risk of osteoporosis, cardiovascular disease, dementia. In this case. The therapy should be continued until middle menopausal age is reached. HRT cannot be prescribed without objective indications for use. Women taking HRT drugs should visit a gynecologist at least once a year and undergo a full examination. The decision on the timing of HRT and its termination is made by the patient and her doctor, depending on the achievement of treatment goals. A woman should start the therapy with the lowest effective dose.

Today there are various release forms of HRT drugs:

Pills are the most popular type of hormonal drugs since they are convenient to take. However, in the presence of diseases of the gastrointestinal tract or liver, tablets should be discarded in favor of local or transdermal drugs. They do not have a harmful effect on the digestive tract and do not interact with other drugs.

What to consider when buying a HRT drugs?

First of all, HRT must be prescribed by a doctor. Self-medication in this case is unacceptable. Only a specialist is able to determine which drug and in what doses can be taken to achieve maximum effect with minimal risks. But even the doctor does not always have the opportunity to prescribe HRT to the patient. This can be caused by the presence of contraindications, strong psychological and physiological reactions. Sometimes it is possible not to use HRT in menopausal syndrome of mild degree, as some alternatives have become known to medicine. Your doctor may also recommend taking phytoestrogens, for example, drugs based on genistein. They practically have no side effects and cope well effects of osteoporosis, hot flashes, and depression.

Citycenterpharmacy.com is a website that contains materials for educational purposes only. This information belongs to medical subjects. Posts published may contain brand names of drugs, substances and pharmaceutical companies. Our main goal is not to promote them but to make people aware of these medical issues. Our company has no relation to the drug manufacturing process. We also bear no responsibilities for incorrectness or irrelevance of information posted on the website.

Our company also is not responsible for references to third-party websites and their content. We do not check the correctness of the information posted on them. If you have pretensions, please, contact our customer care department. The operator will inform you about all possible aspects.

Our online company has no relation and connection to Central RX Pharmacy. If you need to get to know about the previously mentioned company, surf the Internet, please. City Center Pharmacy is an individual facility.